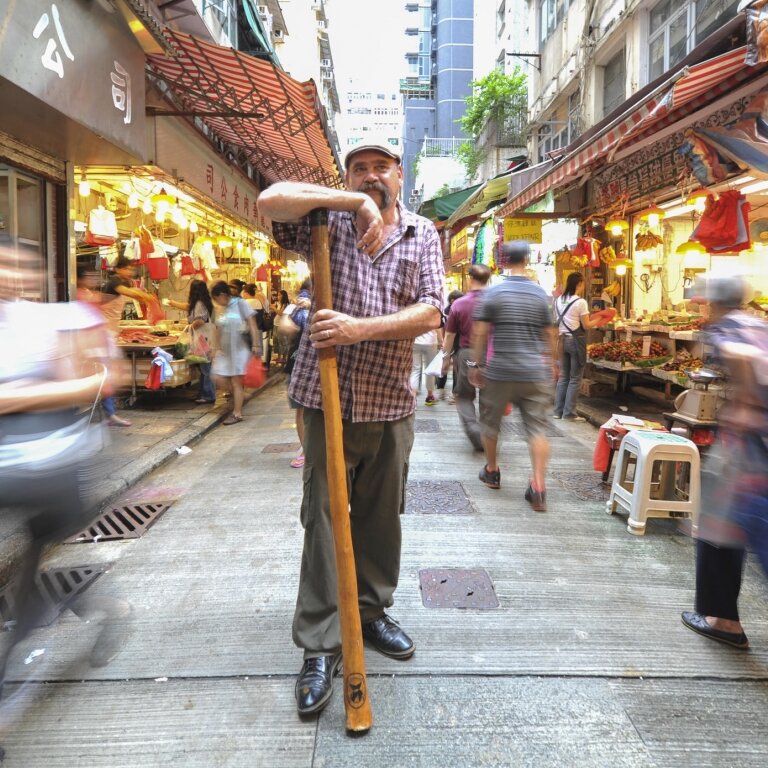 Mark is a descendant of the Yamijti people of Western Australia and of Irish-Australian heritage. Not only he is a master of the didjeridoo but also a storyteller, song writer, drummer and visual artist. Mark is one of the few players able to work across most styles of music as a soloist and ensemble player. He has performed around the world, working with musicians such as Robert Plant and Jimmy Page of Led Zeppelin, Donal Lunney in Ireland, Peter Sculthorpe, James Morrison, Phillip Glass, Sinead OConnor, Ravi Shankar and many more. Mark has featured with the London Philharmonic at a Festival Hall concert, London in 1996. He is also a prolific instrument maker, making and painting didjeridoos from the logs he collects on trips into the bush north west of his home town of Tamworth, New South Wales.

Mark is among the finest and most famous Didgeridoo players in the world. Through Marks lips the air blows as natural desert sounds, in old ethnic chants, in polyphonic melodies of astonishing rhythm.
Mark is the founding member of “Kooriwadjula” (literally black man/ white man) a contemporary/traditional performance group that performs widely in festivals, rock venues, universities and schools, touring nationally and internationally.

Mark has a long history of performances in Australia including the outdoor venues and major festivals. Internationally his accredited performances include the Raffles Hotel in Singapore, the Heidelberg Festival, Expo 92 Seville Spain, Festival Hall with the London Philharmonic and many show in Europe including the 98 Rudolstat Tanz and Folk Festival. In 1999 he was invited to WOMAD (Seattle USA) as visual artist and musician and in 2000 recorded and released Ankala & World Orchestra in Europe on the Network Label. Also in 2000 Mark was a featured artist at the Presentation of the Olympic Team in Belgium at the Memorial IvoVan Danne.

In 1993 Mark joined the cross-art form, cross-cultural performance ensemble REM Theatre to help creating the megamedia event ICON for the Sydney Opera House 20th Birthday Celebrations. He performed a body of original work with the SBS Youth Orchestra and The Sydney Philharmonic, as well as performing on the sails of the Sydney Opera House.

Subsequently he received a fellowship from the NSW Ministry for the Arts and continued to work with REM Theatre Company as a musician, composer and music director on a number of productions including Story of the Firechild, Music Tree, Buralga and Kickin Up the Dust. In 1999 Mark toured in Europe with a new music theatre creation by REM Theatre called ToteMMusic which premiered at the prestigious Lucerne International Music Festival in Switzerland and showcased in Australia at the 2000 Performing Arts Market.

In 2000 Mark has featured with Charlie McMahon and Gondwana band at the Opening Ceremony of the Paralympic Games in Sydney. In 2001 Mark has toured with ConSpiritOz with Musica Viva to Malaysia and with his own band in Europe. In July he featured at an Australian Festival produced by Seoul Arts Centre in Korea and world premiered his partnership with Phillip Glass in Melbourne at the Melbourne Town Hall and in New York at the Lincoln Centre. He was invited to stay in New York and record as session musician on Godfrey Reggios next Glass collaboration Nongysqatsi.

As an artist Mark has exhibited in Japan, Europe, and USA both in contemporary and traditional styles.

Mark has numerous recordings and compositions to his credit and is a regular on the QANTAS inflight entertainment program. His awards and achievements include the Golden Didjeridoo for the Tamworth Festival.

Find out more about Mark Atkins.

I have known Kristian Benton for a number of years. Not only has a mate and didge player but also has a didge maker. I myself being a professional player for over 20 years am proud to have some didges made from world renowned didge makers from around the world, and its nice to know here in Australia,  we have Kristian Benton. He has heart and soul that he puts into his instruments, which you understand once you see and play one. I’ll be recording with one of Kristian’s didges on my next album.