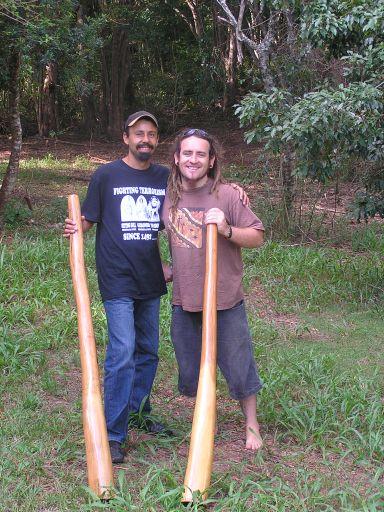 Gumaroy is a descendant of both Gomilaroi and Wakka Wakka nations of South Western Queensland and North Western NSW.

For many years he has been the guest of countless dance groups, schools, festivals and traditional communities in the capacity of Yidaki (didgeridoo), player, cultural educator and performance poet. Having recorded, performed and toured with acts of great renown such as Waak Waak Jungi (NT), Yalakun Dancers (NT), Wild Marmalade (NSW), Kristian Benton (NSW) and The Zinnies of Ireland to name a few.

He is set to return for a second time in July for an extensive tour as song man for the amazingly popular Ganga giri whom he has recorded with on giri’s past two albums. Other efforts as a recording artist include Fields of green, Yidaki Yulugi and more recently on Kristian Benton’s new album Spirit Alive as song man on two of the songs.

Gumaroy was chosen to sing to a huge crowd to bring in the new year of 2004 at the Woodford Folk Festival with crowd favorites Wild Marmalade, he has also closed The Peats Ridge Festival with his cousin. His ambition as a solo artist and for the future is to record and preserve the many precious songs and stories of his people and use them as an invaluable medium to get across the beautiful message of the ancient ways, the ways that still hold him steadfast in today’s ever evolving world, the very same ways that have seen his people exist here for over forty thousand years.

I have had the pleasure of providing Kristian Benton’s reputation of his amazing Yidaki’s to some of the finest players I have known. Not to mention to many novices that find the learning process a lot more easier when beginning on a Benton! I have myself been given a few of Benton’s sticks, being in my favourite key of E!

Having played the instrument for almost twenty years now, I find these instruments so effortless, therefore leaving you to concentrate on the structure of compositions rather than technique, as they are easily amongst the worlds finest when comparing responsiveness, tone quality and not to mention durability!

My Benton sticks have traveled this planet many times now and continue to allow me to play with ease the different styles that I have learnt from my many masters! Both traditional and modern! I can personally guarantee that Kristian can custom make any kind of Yidaki to suit your style of playing and where you want to go with it! I am still amazed at how he was able to create my first E that I have used now for a few years with both my brothers in our traditional dance group, and yet still have jammed with many contemporary ensembles with the same stick! the man has definitely learnt his trade very well that’s for sure!

I have been lucky enough to have been provided with many brilliant sticks from makers all around the world… and you can be assured that when you see brothers like Mark Atkins, Xavier Rudd, to name only a few playing these instruments! you have got something special in your Benton! need I say more? Besides, it takes a great player with a good understanding to make such instruments! and Kristian has got the whole package!